Did you know that technology originally developed and used in the construction of the Hubble Telescope has been applied to vision correction? Ophthalmologists and space scientists worked hard to evolve wavefront technology to the point where it could improve vision. Wavefront technology, first developed in 1978 by Josef Bille, Ph.D., director of the Institute for Applied Physics at the University of Heidelberg, was initially called adaptive optics.

Adaptive optics allowed astronomers to see distant stars with the Hubble Space Telescope. The main objective of this technology was to remove visual distortion or aberrations from the atmosphere allowing scientists to more precisely view images.

Since the advent of wavefront technology into the field of ophthalmology, many patients have benefited from the technological breakthrough. The main issue that wavefront technology addresses are aberrations. Aberrations can be separated into two categories HIGH and LOW. Low order aberrations are the familiar sphere and cylinder of myopia, hyperopia, and astigmatism, measured through refraction and denoted by diopters on your prescription.

This is precisely what conventional LASIK was aiming to correct. Higher-order aberrations such as trefoil, coma, and other similarly unfamiliar terms cannot be measured with a standard refraction. Instead, they are measured with an instrument called an aberrometer. The aberrometer measures the total amount of aberrations in the eye, including the refraction, and then transforms this complex data into a wavefront map. Aberrometer findings are transferred and then loaded into the excimer laser for treatment. The laser ablation pattern to improve your vision is derived from the total set of aberrations.

Wavefront technology has been commercially applied to the field of vision correction and has been branded by companies under names like CustomVue, LadarWave, and Zyoptix. Most ophthalmologists refer to LASIK with wavefront technology as Custom LASIK. Custom LASIK allows the doctor to tailor the LASIK procedure to each individual eye and potentially improve upon the already excellent results available from the conventional procedure.

This next-generation technique uses wavefront technology to measure the entire eye and create a “three-dimensional” map. The map contains detailed optical information that is unique to each eye, much like a fingerprint is unique to each individual. The doctor uses this information to guide the laser in customizing the treatment to the eye’s particular visual irregularities. While conventional LASIK corrects refractive errors known as lower-order aberrations (myopia, hyperopia, and astigmatism) that affect how much we can see, Custom LASIK also has the potential to improve higher-order aberrations (coma, spherical aberration, and others) that affect how well we can see.

At the Texas Eye and Laser Center, we have always prided ourselves on offering our patients state-of-the-art technology, which is why we are excited to introduce the incredible iFS™ Advanced Femtosecond Laser. Previous lasers used have been highly efficient and safe, but like trading in a reliable vehicle for a high-performance sports car, the upgrade to the 5th generation of iFS™ Advanced laser allows for a faster, smoother, more controlled LASIK procedure than ever before.

Ophthalmologists using the first experimental femtosecond lasers worked with technology that operated at 2 kHz and took 5 minutes to create the necessary corneal flap. Today, with the 5th generation iFS™ Advanced Femtosecond Laser, our surgeons are operating at 150 kHz and can create the flap in just 8 seconds! This is approximately 2 ½ times faster than the previous model. The important thing to remember is that speed does not mean less control. In fact, speed is an asset and allows for greater control and less chance the patient experiences any discomfort. With the inverted side-cut technology, the corneal flap virtually “locks” into place, creating even more corneal stability.

Additionally, the higher rate of speed allows for less energy to be used on each laser pulse, which can lead to an overall better outcome and experience. The main benefits can be seen with faster healing times, improved corneal stability, smooth corneal surface, and clear vision sooner rather than later. Speed equals less discomfort and a smoother overall procedure.

Advantage of the Oval Flap

Corneas are naturally oval-shaped. So naturally, the flap that is created should be oval-shaped as well, right? Up until now, previous lasers have cut a generic circle flap. But that is where the iFS™ Advanced Femtosecond Laser sets itself apart from the rest, by bringing an innovative new oval flap creation technique. The results are preserved corneal nerves, better biomechanical stability, and the ability to locate the flap size and location to the exact area of the cornea needing treatment. The oval flap also gives our surgeons an advantage when dealing with farsightedness and astigmatism, an advantage that was previously unavailable.

Also new to the surgery suite is the implementation of the “heads-up” touch screen which allows our surgeons and assistants an even greater amount of precision than before. Together with improved corneal strength, a faster procedure, and fewer to no complications, the iFS™ Advanced Femtosecond Laser speaks for itself with the number of successful LASIK procedures it has performed and the lives it has improved. You can unlock a whole new world of visual freedom. The key is iFS™ Advanced Femtosecond Laser! At Texas Eye and Laser Center we combine advanced technology with “personal touch” patient care for faster visual recovery in a friendly environment. 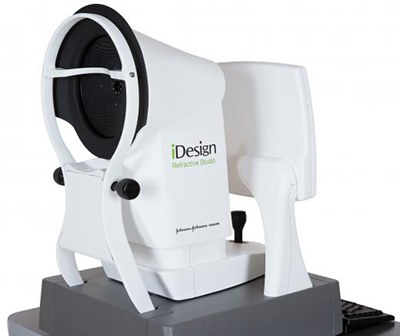 Your eyes are as unique as your fingerprint – wouldn’t it make sense to use a device that corrects visual imperfections with the same approach?

Texas Eye and Laser is proud to introduce the WaveScan® iDesign System for LASIK, a new technology that measures your eyes with more than 1,200 micro-readings to provide advanced precision and accuracy in surgery. This system captures several different types of measurements of your eyes in a one-time, three-second scan, which is then transferred to the laser for your procedure.

The sensor technology was originally developed for NASA to help build the new James Webb Space Telescope, which is replacing the Hubble Telescope and is scheduled to launch in 2021. This technology, which allows NASA to view high-resolution images of deep space, is being used to allow doctors to map your eyes in the same way. This means the treatment plan can be customized for each individual characteristic of your eyes.

The iDesign machine works by measuring several different variables of your eyes, including corneal topography, pupil size and dilation, and keratometry. By gathering detailed information and sending it all directly to the laser, the equipment provides high-quality results and increased precision of laser eye surgery. Often there are details being picked up in the scan that surgeons could not even see prior to this technology.

iDesign captures a meticulous blueprint of your eye that is transferred to the computer-guided laser. Any imperfections can be immediately identified and potentially corrected on the spot during your procedure. This technology is ideal for treating complex cases because it yields the best possible outcomes with a lower risk overall.

If you want to improve your quality of vision and resume a healthy active lifestyle glasses-free, look no further than the WaveScan® iDesign System. For more information on how this technology could benefit you, contact us at Texas Eye and Laser today!